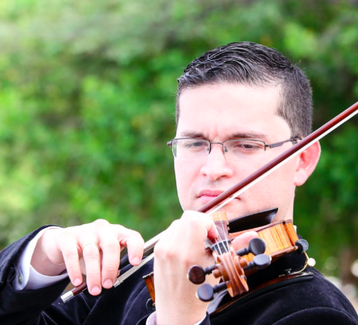 Award-winning violinist Simón Gollo is one of the most versatile and successful Latin American artists of his generation residing in the United States today. His diverse career demands him to serve the roles of artist director, conductor, soloist, chamber musician and pedagogue.

Currently, Simón Gollo is Assistant Professor of Violin in the Department of Music at New Mexico State University (NMSU) and Conductor of the NMSU Philharmonic. He is the founder of Las Cruces Youth Orchestras at NMSU and Founder and Artistic Director of the international music Festival: “Aruba Symphony Festival and Academy”. Since 2016 Simón Gollo has a prominent career as a conductor emphasizing his artistic commitment to social projects of a musical nature in El Salvador, Colombia, Brazil, Mexico, Vietnam and the USA.

Simón Gollo is a recording artist for IBS Classical (Spain). His recording “Homage to Ernest Chausson” with the pianist John Novacek is distributed around the world. 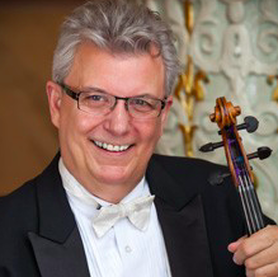 Randolph Kelly has enjoyed a distinguished and multifaceted career as principal violist of the Pittsburgh Symphony Orchestra. He was signed by André Previn in 1976, and has since played under the direction of Lorin Maazel and Mariss Jansons. Previn once wrote that Kelly "transformed his section into what I believe is the best viola section of any orchestra in America." One highlight of Kelly's tenure with the PSO was performing the world premiere of a viola concerto written for him by Samuel Adler. The PSO commissioned this piece for their 2000-2001 Season.

In addition to his orchestral career, Kelly's virtuosity as a soloist and chamber musician has been celebrated around the world. He has collaborated with such artists as Yo-Yo Ma, André Previn, Pinchas Zukerman and Trauls Mork, among others. He has recorded and toured extensively with the Los Angeles Piano Quartet. In reviewing an LAPQ performance, the German Press Passaver Neve stated, "Randolph Kelly is in a class of his own. He has a richness of tone such as one seldom hears..." Additionally, Kelly has been invited to perform as a guest artist at chamber music festivals in Japan, Australia, Europe, China, Taiwan and Russia.

As a soloist, Kelly has appeared on some of the most prestigious concert stages in the world. He performed the New York premiere of Sir Michael Tippet's Triple Concerto in Carnegie Hall. He made his European solo debut when Lorin Maazel invited him to play the Walton Concerto with the National Orchestra of France. James De Priest conducted the Oregon Symphony when Kelly played the Bartók Viola Concerto. The review in The Oregonian stated, "guest soloist Randolph Kelly provided the evening's highlight... it was a breathtaking performance. "In addition to his rigorous performing schedule, Kelly has recorded a wide range of music for the Albany, Naxos and Music Masters labels. He also appeared on National TV, performing Don Quixote as part of a series entitled Previn and Pittsburgh. Randolph Kelly is a graduate of The Curtis Institute, where he worked closely with the esteemed violist Joseph DePasquale. He is committed to performing new music, and he generously volunteers his time to educational programs in an effort to bring a wide range of musical experiences to young audiences.